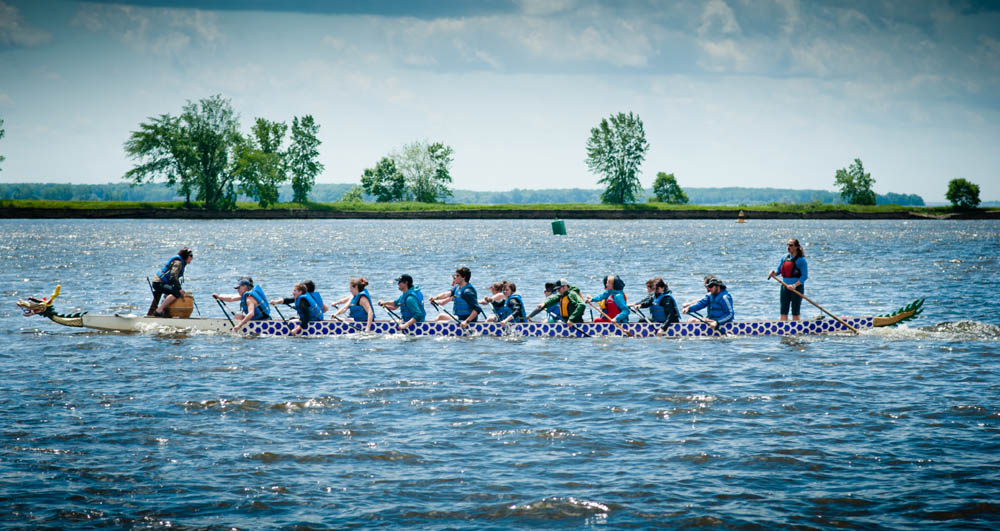 La Méridienne, with the collaboration of the women’s shelter Le Séjour (Fédération des maisons d’hébergement) and the Sherbrooke Nautical Club (Dragon Boat division), built up a physical activity session in the summer of 2016 for women survivors of domestic violence. For eight weeks, the participants have been initiated to the Dragon Boat activity.

The idea to create this kind of project came from a discussion between the cancer survivors team coach and the counselors at the shelter for women victims of domestic violence. From their conversation emerged the great idea of transferring the benefits of dragon boat activity from women suffering from cancer to women victims of domestic violence. The goal is to offer to these women a chance to undertake a process of reapropriating the power over their life by doing Dragon Boat.

The ultimate goal of this project is to create with the women victims of domestic violence the same bond that unites the cancer survivors. We built a team of 15 to 20 women who are or have been victims of domestic violence and who are in a process of regaining power over their lives. The participants rowed together in synchronization in a spirit of mutual help, solidarity and personal achievement towards a full re-appropriation of themselves.

The implementation of this project is intended to be a precursor of changes, both physically and mentally. It sends a clear message of regaining power by reinforcing the importance and the strenght of the bonds which unite the participants, which fight the same thing. The practice of this activity allows them to break the feeling of helplessness and isolation through commitment, action and complicity.

The Dragon Boat is a sport that is gaining a lot of popularity all around the world. Its particularity is the team work, where everyone must make the same movement, at the same rythm to move the boat forward. Everyone must listen to their teammates, which create a real spirit of solidarity and respect for one another. During the activity, the spirit of mutual help is really there and it can contribute to considerably increase the positive self-perception.

The participants have been accompanied and supported throught all the process by two counselors at la Méridienne with recognized expertise in the problem of domestic violence and by the coach of cancer survivors team. They had 1 hour and 30 minutes work-out, once a week, for a total of eight weeks.

At the end of the activity, we made a video with the touching testimonies of all the participants and their appreciation of the activity. Here’s the video below.